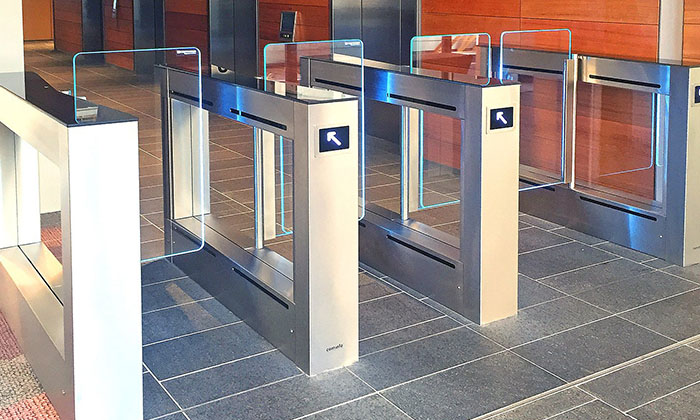 Posted at 23:19h in Case Studies by Jonas Marketing

The first stage of Hobart’s $150 million Parliament Square redevelopment project was completed at the end of last year with the official opening of the 5-star Green Star Design Rating Salamanca Building.

The building, which is home to employees of government agencies and the Department of Premier and Cabinet, features three EasyGate SPT speedgates in the main reception area, and integrated OTIS destination lift control system, which supports more efficient lift allocation, reducing crowding in cars and delays resulting from conflicting destinations.

The EasyGate SPT speedgates are part of Centaman Entrance Control’s premium range and boast the unsurpassed tailgate detection, speed and alarm accuracy synonymous with the EasyGate brand. They feature magnetic direct drive motors, which are among the quietest, fastest and most reliable on the market.

They also have a mean time between faults of 5,000,000 operations, which is higher than the entire product life of some security gates and critical in a high-traffic, high security environment.

It was also important the security solution didn’t take away from the building’s sleek, modern design, something the EasyGate SPT’s unobtrusive, slimline design was able to easily accommodate.

“The EasyGate SPT was the ideal choice for the new Salamanca Building. It is reliable, unobtrusive and offers the high-level security required in such an environment.”
– Michael Bystram, General Manager, Centaman Entrance Control